he project “Deconstruction Time Again” is based on the principle of temporal deconstruction interpreted in two layers; the first via the installation “Fragment in Space" (White Roads in the red Matrix) and the second through other projects based on a chronophotographic content.

The “Fragment in Space” installation is in continuation of my artistic demarche during the past few years. Having started with work on media content with still or moving images, I’ve tested the process that later became a principle of creation: deconstruction.

This process applied to photography, consists of  the decomposition on several layers fixed elements, by keeping an accurate representation of the moving parts is designed to create a break with the original representation of the object, in order to offer the public another point of view and another field experience. The works related to the concept of spatial deconstruction are presented on the WYSI * not * YYG project.

Applied to moving images (digital chronophotographs), the same process breaks down into several layers the moving parts while maintaining a faithful representation of the fixed elements.

The result is relative to the nature of the content, giving rise either to a re-organization of the still image that affects the viewer on a psychogeographical way, or a blend of different fragments of images / moments reflecting the temporal plurality in a still picture.

The results of the testing of this concept of deconstruction, initiated the project idea of installing “Fragment in Space". This is the moment of transition in my artistic process. Based on the deconstruction that creates the fragment, I realized that this visual element geometrically rectangular is the tool of my creations.

I made the purpose to operate a little more this tool and push radically the research. The rectangular fragment becomes the core material of the work.

The outcome of this research is to organize a sculpture in the space according to the fragment, autonomous, three-dimensional and animated in time by a sound and light scenario. A matrix that floats and evolves with light. From there, my approach opens a new dimension.

Based on research begun in 2005, this idea was implemented in different forms and formats: Fragment in Space installation, Once Upon a Time the Presidents series and Discrete Time series are the works, which show the project. 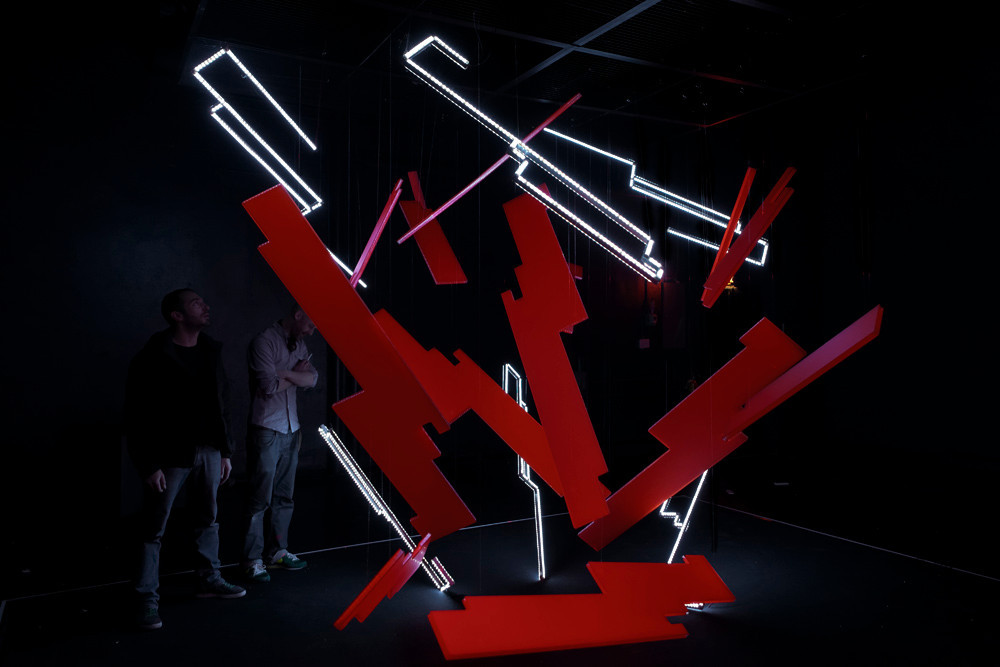 ragment in Space is a light and sound sculpture whose elements are suspended by transparent strings and via hooks attached to the ceiling grid.

These elements are fragmented in a space according to a dynamical layout which increases the suspended state and offers the spectators depending on their positions a variety of points of view.

Modular, the system is adaptable to its exhibition space. In this configuration, the facility was located in the center of the room occupied 13 m2 and a height of 3m.

The installation consists of 14 elements in red half translucent Plexiglas and six units composed of an aluminium structure embedded LEDs.

These elements can be independently illuminated in three variants; fully, partially or not at all according to a language, based on the lighting or extinguishing the final 44 parts. This luminous scenography synchronized with a sound design brings the temporal dimension of the work.

Thomas Vaquié who did the sound design created two main sound ‘colors’ as  some kind of translation of the  material to represent. Each element of the installation has its own sound variation equivalent of these two main sounds, and the result will depend on the item it’s supposed to represent (shape, material, color).

The whole forms a library of 44 sounds, the main challenge was to ensure their propagation and potential combination to be melodic and harmonious.

Once Upon a Time the Presidents series

Portfolio: Once Upon a Time the Presidents |

hese presidential digital collages – glitch  –  like reconstructions of the presidential portrait.  Each piece of the series Once Upon a Time the Presidents is made up of various facial features of past American presidents.

Portfolio: Once Upon a Time the Presidents

iscrete Time is a work in progress started in 2005. Applied to moving images (digital chronophotographs), the deconstruction process breaks down into several layers the moving parts while maintaining a faithful representation of the fixed elements.The result is relative to the nature of the content, giving rise either to a re-organization of the still image that affects the viewer on a psychogeographical way, or a blend of different fragments of images / moments reflecting the temporal plurality in a still picture.